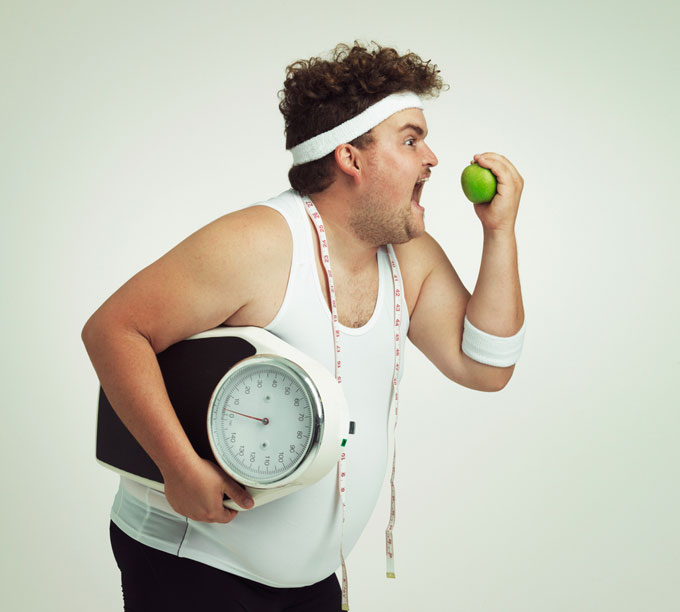 Going back to work after the holidays is often synonymous with weight gain. Change of pace, meals are taken on the go, fatigue, stress, the pounds pile up and your abs quickly disappear under a layer of fat. Do not wait until it is too late to run to the gym and the supermarket, where you will find everything you need to burn fat easily.

No training program or dietary protocol is designed to develop fat mass. Drinks, the way you train and especially what you eat after exercise can, on the contrary, affect your ability to eliminate fatty tissue. We have gathered here 20 simple, tested and approved tips, which, used together, can help you stay slim and slender during the winter. And don’t forget: if your goal is to have abs cut out all year round, get down to work immediately.

The acceleration of metabolism following training is called the “afterburn effect”. After analyzing numerous studies, scientists from the Norwegian University of Sport and Physical Education have discovered that performing short series with heavy loads accelerates resting metabolism more than the same work done with long series and light loads. Do not completely abandon training in long series, but occasionally perform heavy sessions (3 to 7 reps per series), so as to optimize the number of calories burned outside the room.

Although born in the homeland of the Oktoberfest, German researchers have shown in a study that drinking about two glasses of cold water (no beer) boosts metabolism by about 30%. This effect is believed to be due to the increased secretion of norepinephrine.

Consuming slow sugars such as brown rice, oatmeal, and wholemeal bread keeps insulin levels low and prevents peaks from slowing fat burning. A study at the University of Pennsylvania found that subjects on a low-calorie diet with a carbohydrate intake of only whole grains eliminated more fat tissue than subjects on a low-calorie diet with refined carbohydrates.

Not only do some fats – in particular, omega 3 – not cause fat gain, but they also promote fat loss. The intake of healthy lipids should represent 30% of the total caloric daily. Oily fish such as salmon, sardines and trout, as well as olive oil, peanut butter, and nuts are all healthy fats.

New Jersey College researchers have found that 30-second recovery times between bench press series burn more than 50% more calories than 3-minute rest times. In order to optimize fat-melting, make sure to recover less than 1 minute between each series.

Grapefruits, oranges and other citrus fruits are packed with vitamin C and fiber, which reduce the risk of heart attack and promote fat loss. According to a study carried out at the Scripps Clinic in San Diego, subjects who ate half a grapefruit or drank 25cl of grapefruit juice three times a day while eating normally the rest of the time lost an average of 2kg in 12 weeks. Some even lost up to 5kg without dieting. This effect is mainly due to the ability of grapefruits to lower the insulin level. Add half a grapefruit to some of your meals, including pre-workout meals.

The subjects of a study having carried out three sessions of 10 minutes of running, spaced by 20 minutes of recovery, found this training easier than when they ran with the same intensity for 30 minutes. Performed split, cardio burns even more fat and has been shown to eliminate more calories after exercise than the same exercise performed continuously.

8) Pay yourself a lawyer

Avocados are packed with monounsaturated fats, which are generally not stored as adipose tissue. They also contain mannoheptulose, a sugar that prevents insulin secretion and promotes the absorption of calcium. As we said earlier, it is imperative to optimize fat loss that the insulin level remains low for most of the day. Absorbing sufficient calcium also seems to promote fat loss.

According to a study published in the American Journal of Clinical Nutrition, people who eat a high protein breakfast (35g of protein) feel full for longer.

To lose weight, you need to go beyond muscle failure, by performing forced reps, static contractions, partial recoveries or degressive series. A study of university-level American football players found that a high-intensity strength training program – one set per exercise at 6 to 10 reps until muscle failure, followed by forced reps and a static contraction lasting several seconds – causes a greater fat loss over 10 weeks than a low-intensity program (series of 6 to 10 reps per exercise, without going beyond muscle failure). This effect is believed to be due to the peak secretion of growth hormone (GH) observed in subjects training at high intensity. A Finnish study has shown that with forced reps,

When on a diet, reduce the amount of water used to make your protein shakers, to reduce the feeling of hunger. In a study at Purdue University, subjects who drank two shakers with identical nutritional content reported feeling fuller longer after consuming the thicker shaker.

Dairy products are rich in calcium, which can stimulate fat melting. Calcium is said to have the ability to regulate the secretion of calcitriol, a hormone that forces the body to produce fat and inhibits fat loss. When the calcium level is satisfactory, the secretion of calcitriol and the production of fat are neutralized, while the burning of fat increases. It is therefore very simple to increase the protein intake and to promote lipid melting by adding cottage cheese and yogurts (Greek, plain or brewed) to your diet.

Capsaicin, an active ingredient present in red pepper, is a chemical whose proven ability to promote the burning of calories and reduce appetite. By consuming caffeine at the same time, this effect is further enhanced. Research has also shown that this compound optimizes fat oxidation during exercise. Try adding Espelette pepper powder, red pepper or tabasco sauce to your dishes. If you don’t like spicy food, take a capsaicin supplement.

According to a study published in the American Journal of Epidemiology, subjects sleeping 5 hours or less a night are one third more likely to gain 15kg over 16 years than those having at least 7 hours of sleep. It seems to be an imbalance between the hormones leptin and ghrelin: while leptin decreases hunger and accelerates metabolism, ghrelin increases the feeling of hunger. According to a study at Stanford University, those who slept the least had lower leptin and higher ghrelin and more fatty tissue than those who slept 8 hours. therefore try to sleep between 7 and 9 hours a night, so as not only to promote recovery but also to be healthier and to eliminate fatty tissue.

The polyphenols found in apples are compounds whose proven ability to increase muscle strength, endurance, and even fat loss. Even if it seems that they directly promote the activity of genes which decreases the production and storage of fat, the increase in strength and endurance, which makes it possible to train harder longer, can also optimize fat melting. A large standard apple provides 200 mg of polyphenols.

16) The benefits of HiiT

Bell State University researchers recommend lifting the loads explosively. They think that because muscle fibers contract slowly, they burn more fuel during exercise. To perform quick reps, we will, therefore, choose for each exercise a load between 30 and 60% of your RM. We will do 2 series of 3 to 8 rapids, followed by 2 to 3 series at a normal rate.

Believe us, it is worth spending a little more to eat meat and dairy products from cows that have grazed on grass. British scientists have discovered that organic milk contains 70% more omega-3 fatty acids than traditional milk. In addition, according to a study published in the Journal of Dairy Science, grass-fed cows produce milk containing 500% more conjugated linoleic acid (CLA) than grain-fed cows. Likewise, the level of CLA and omega 3, which both promote fat loss and muscle development, is higher in meat from organic farms.

A study at Loma Linda University, in California, showed that, over a period of 24 weeks, a low-calorie diet (40% of total calories from lipids, main almonds) improves fat loss, unlike a diet with the same number of calories but higher in carbohydrates and less in fat. walnuts and Brazil nuts are also excellent.

It is proven that freeloads, especially during polyarticular movements like squats, burn more calories than these same exercises performed on machines. According to scientists, this difference is explained by the greater number of stabilizing muscles involved in exercises with freeloading.

Any information published on this website is not intended or implied to be a substitute for professional health, nutrition, or diet advice. All content, including text, graphics, images, and information, contained on or available through this website is for general information purposes only. Consult with your physician or seek medical attention before making any health or food-related decisions.
Copyright © 2021 All Right Reserved By FitSavage.
FitSavage